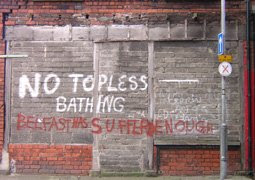 “No Topless Bathing. Belfast Has Suffered Enough” was a collective proposal which aimed to give an insight into contemporary art in Belfast. The perspective taken was a removal from the normal view of Belfast, which is that of a city in conflict. The exhibition took its title from a piece of graffiti sprayed on an inner city wall and is located across from a gay bar. Now something of a local institution, this writing is bizarre and somewhat out of context. Its surreal humor is indicative of a side of the city which is not shown often to the outside world.

“No Topless Bathing. Belfast Has Suffered Enough” was coordinated by Green Dog Arts in partnership with the Digital Studio at Queens Street Studios and the Golden Thread Gallery. The primary aim of the project was to advance of internationally an awareness of and appreciation for contemporary visual artistic production from Northern Ireland. The exhibition featured the work of 20 contemporary Northern Irish artists in La Sala Naranja, independent gallery in Valencia, Spain, with conferences in the Polytechnique University of Valencia and MUVIM, Museum of the Illustration and Modernity, Valencia. More info La Sala Naranja.

This diverse range of artists and media offered a cross section of contemporary visual art being created in Northern Ireland today. Collectively, these artists have participated in hundreds of exhibitions, projects and events, nationally and internationally, and have received critical acclaim in addition to countless awards -including the Arts Council of Northern Ireland. 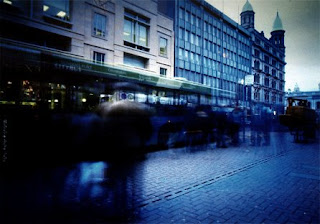 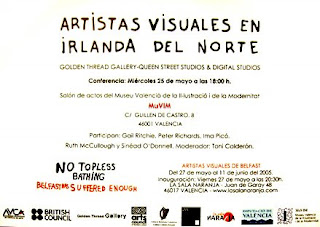